By addressing each others practices, as well as the historical, spatial and artistic context of the museums in which they were performing, the artists collaborated their way through two radical, floating and confronting performance nights. In addition, its audience saw an artist talk and the artists’ contributions to the ‘The Art of Nordic Colonialism: Writing Transcultural Art Histories’ seminar, hosted simultaneously by Nuuk Art Museum.

Disko Arts Festival was supported by Hurtigruten Foundation, the Embassy of Canada to Denmark, Den Grønlandske Fond and Nuuk Lokaludvalg, and collaborated with Ilulissat Kunstmuseum, Nuuk Kunstmuseum, Nuuk Nordisk Kulturfestival and Avannaata Kommunia. The festival was proudly signed up to Keychange’s ‘50/50 by 2022’ pledge.

PRESS: Kunstkritikk: Lions in the Arctic 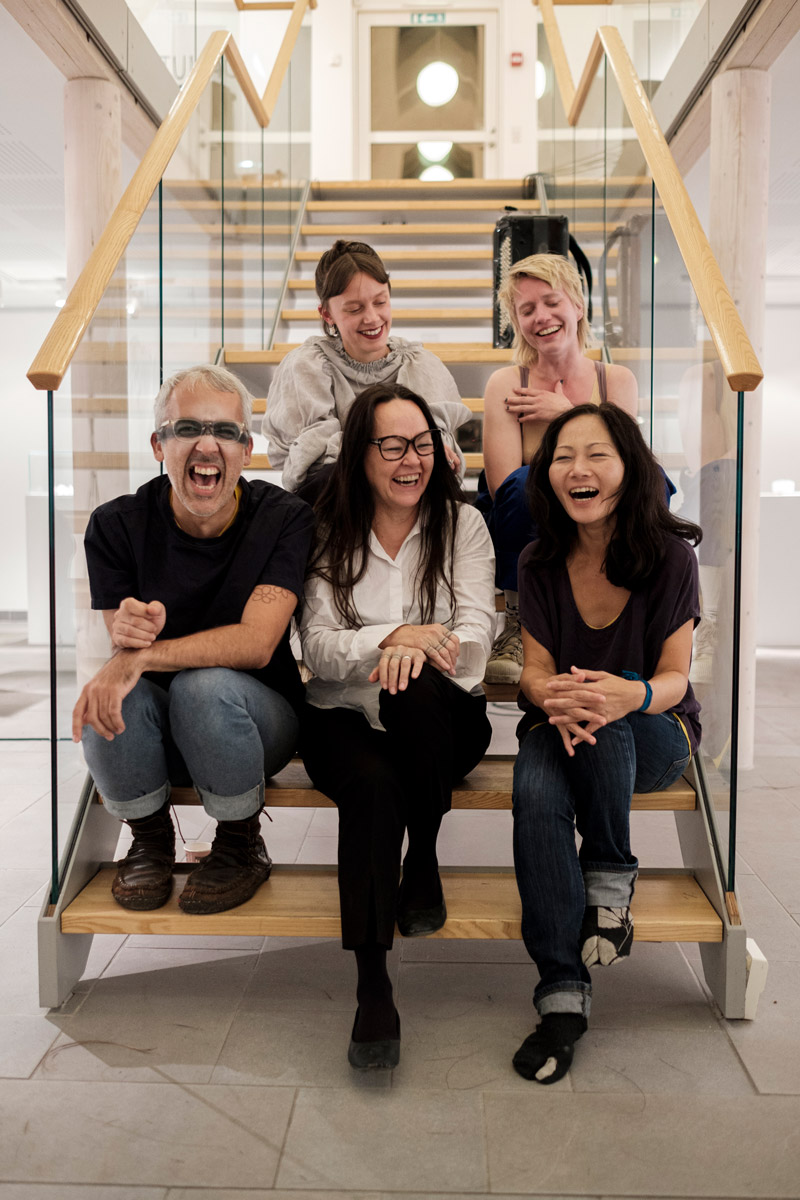 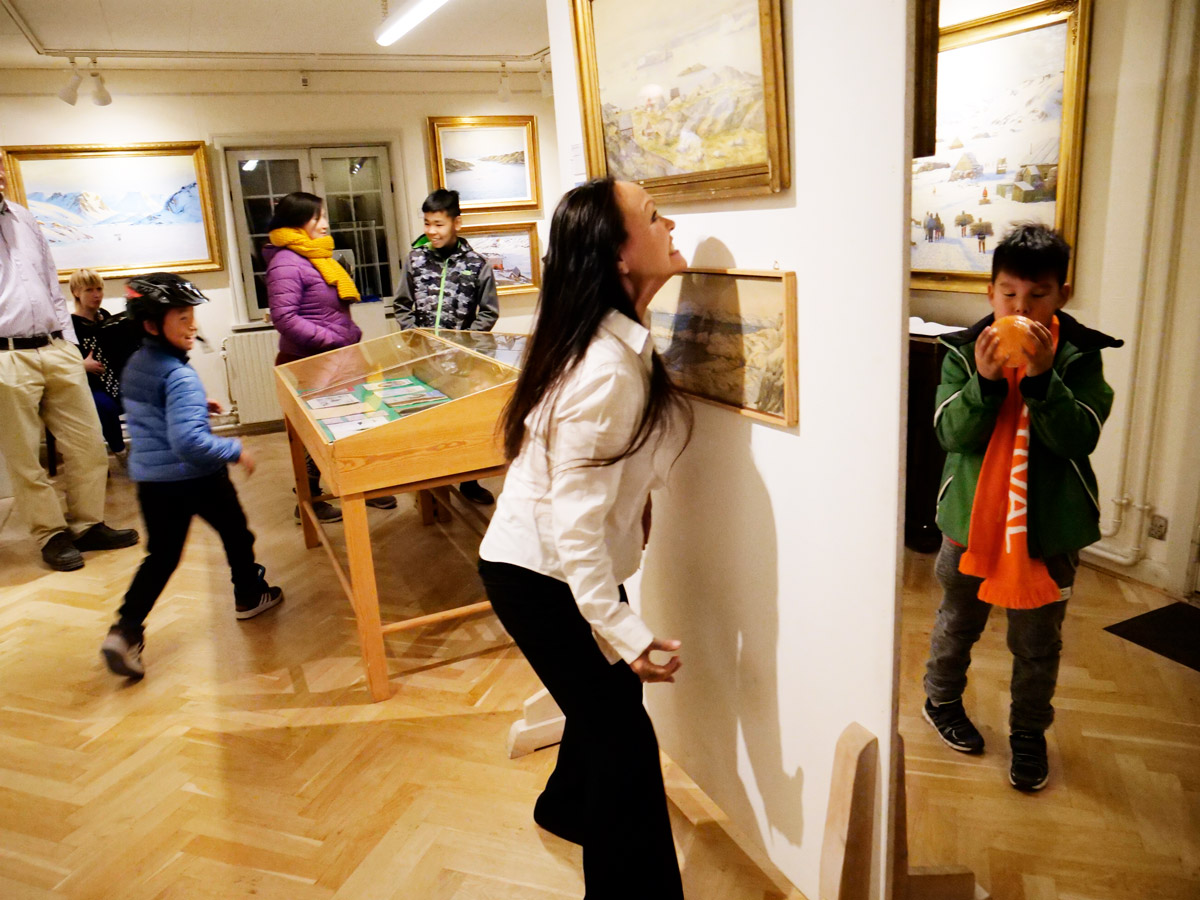 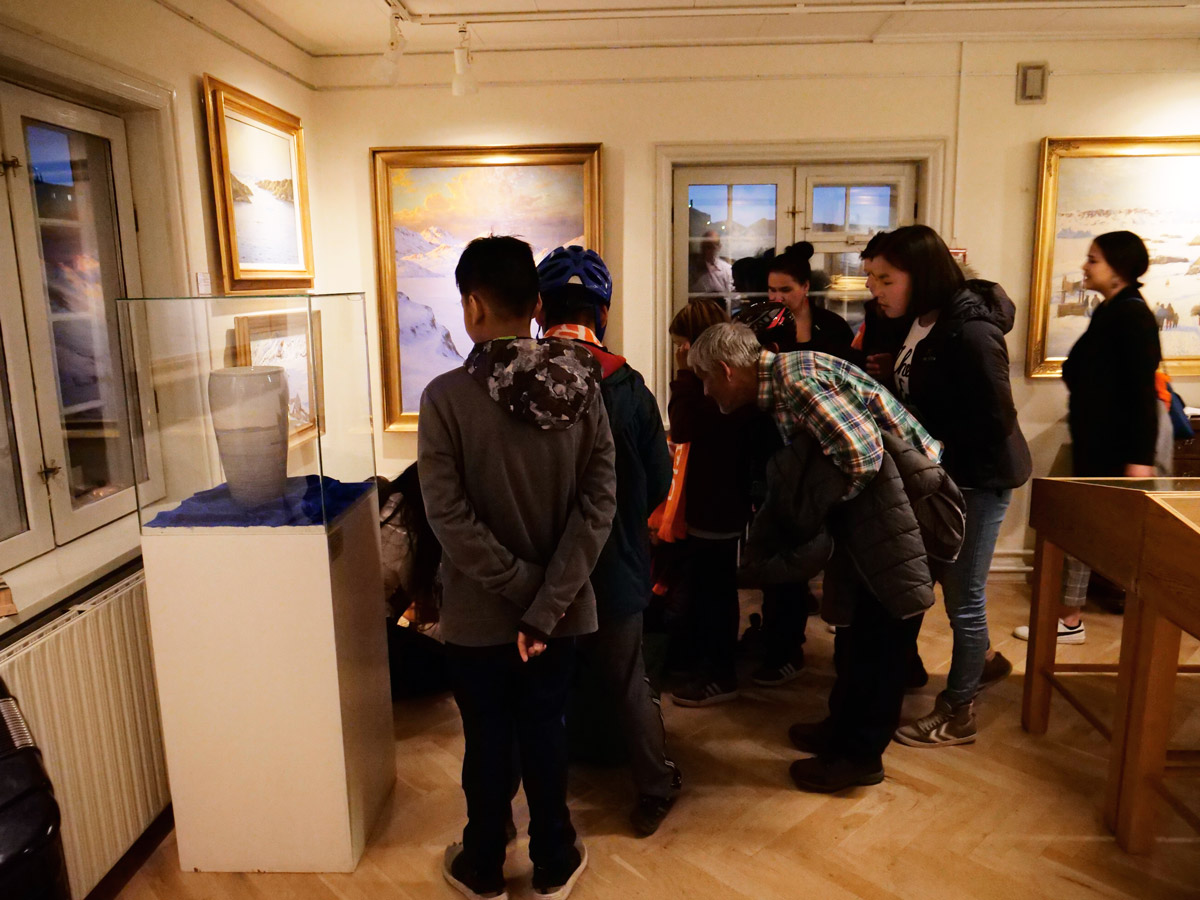 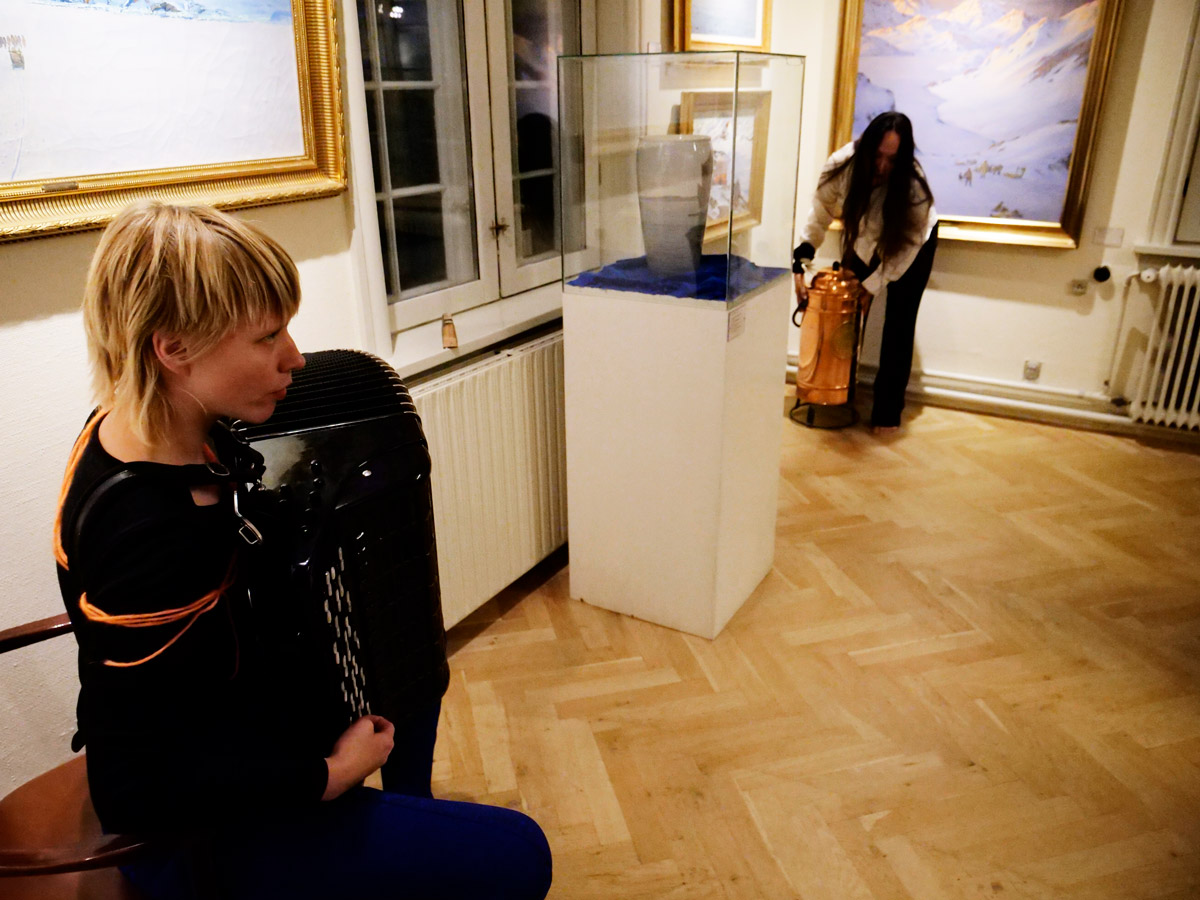 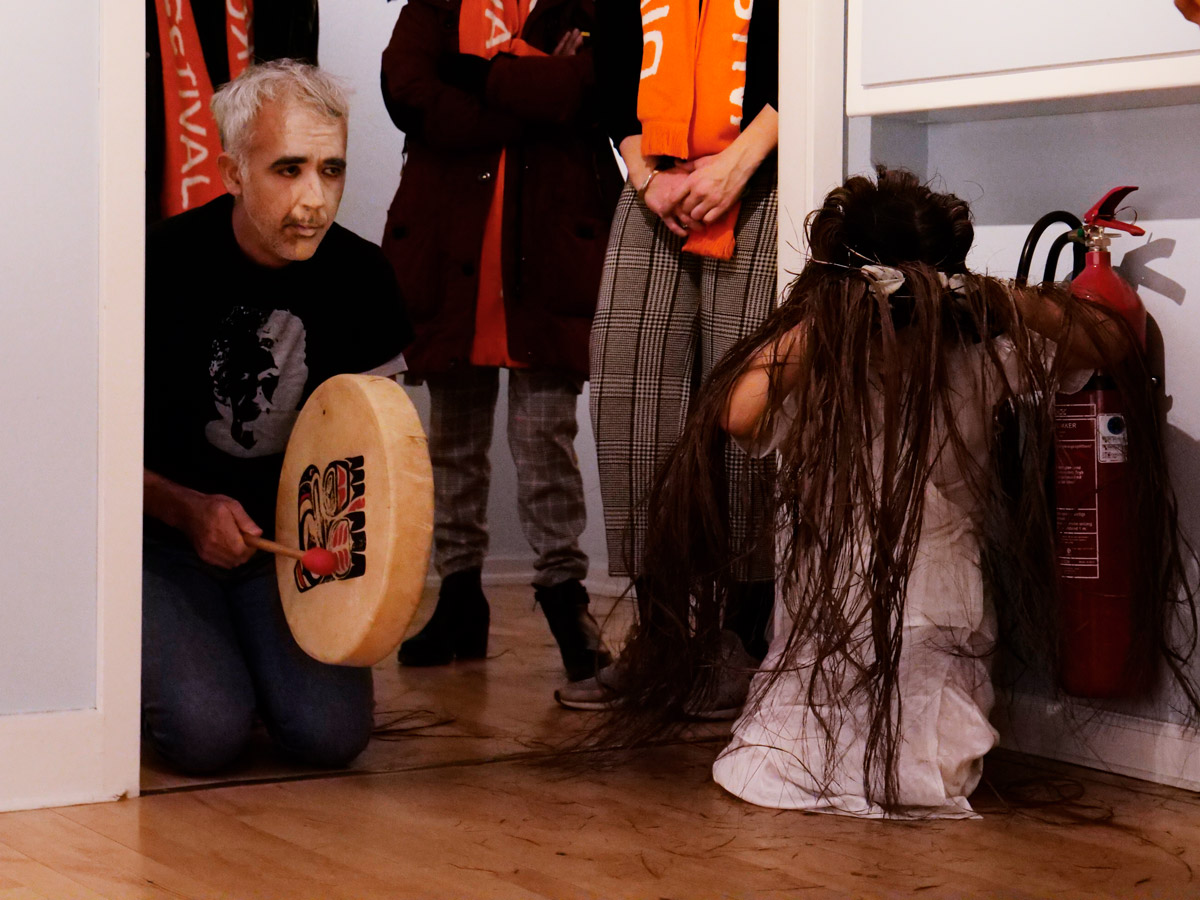 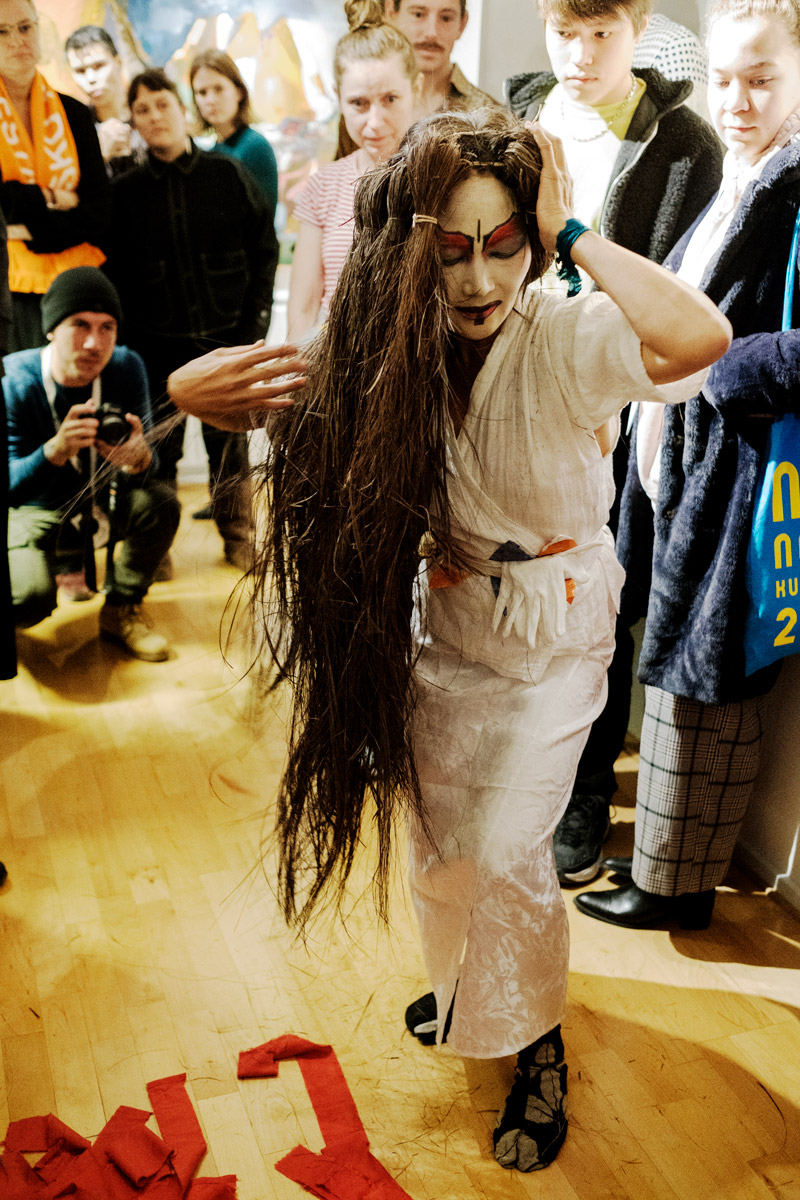 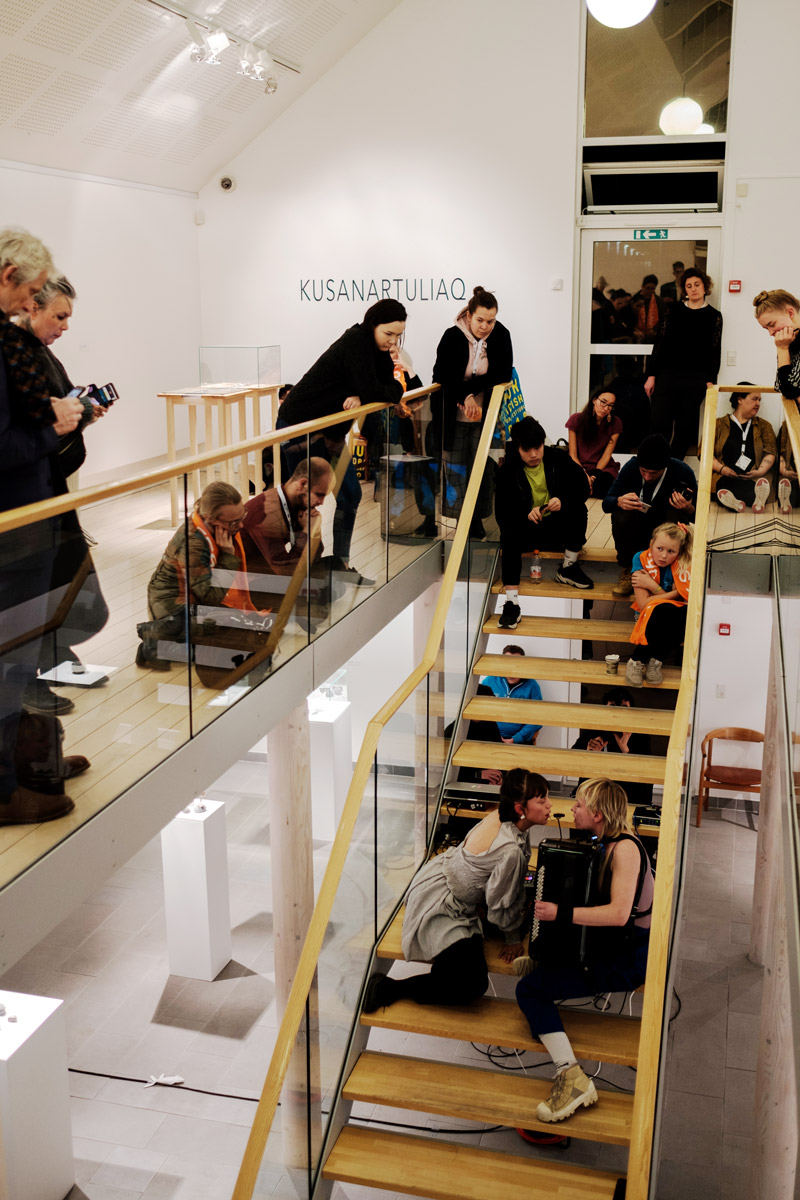 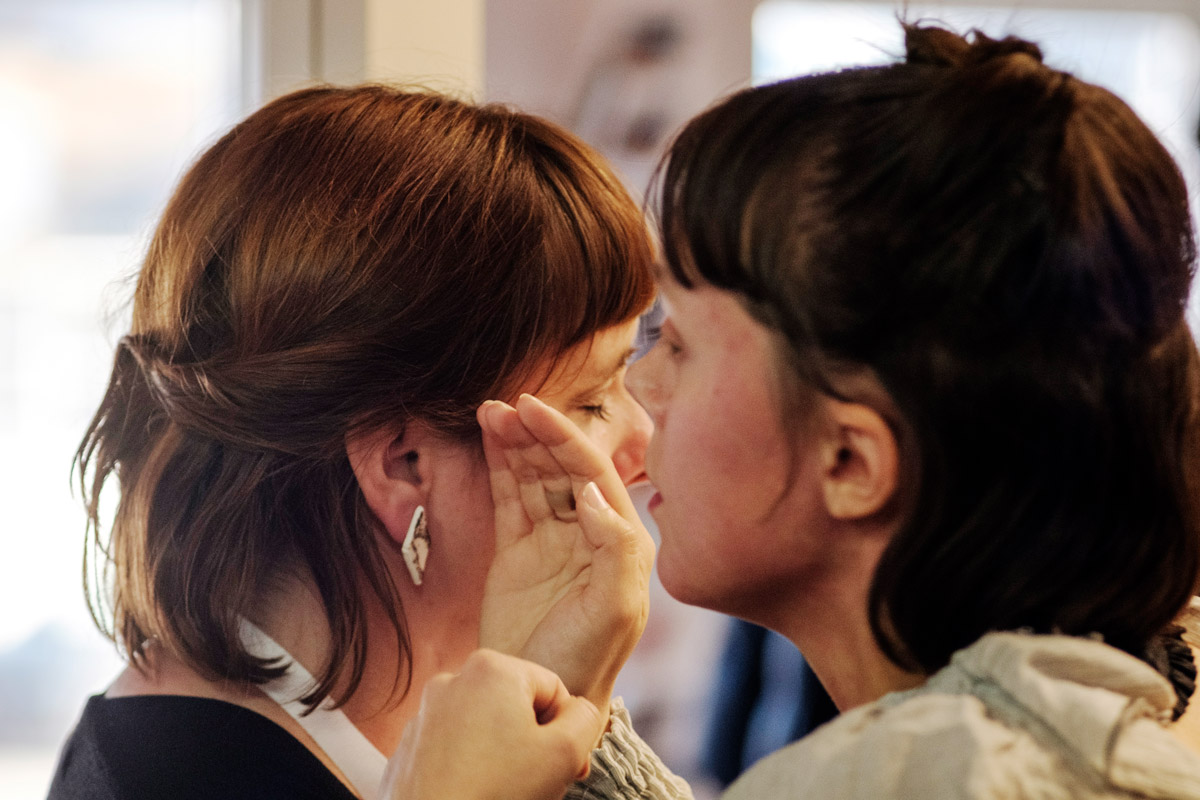 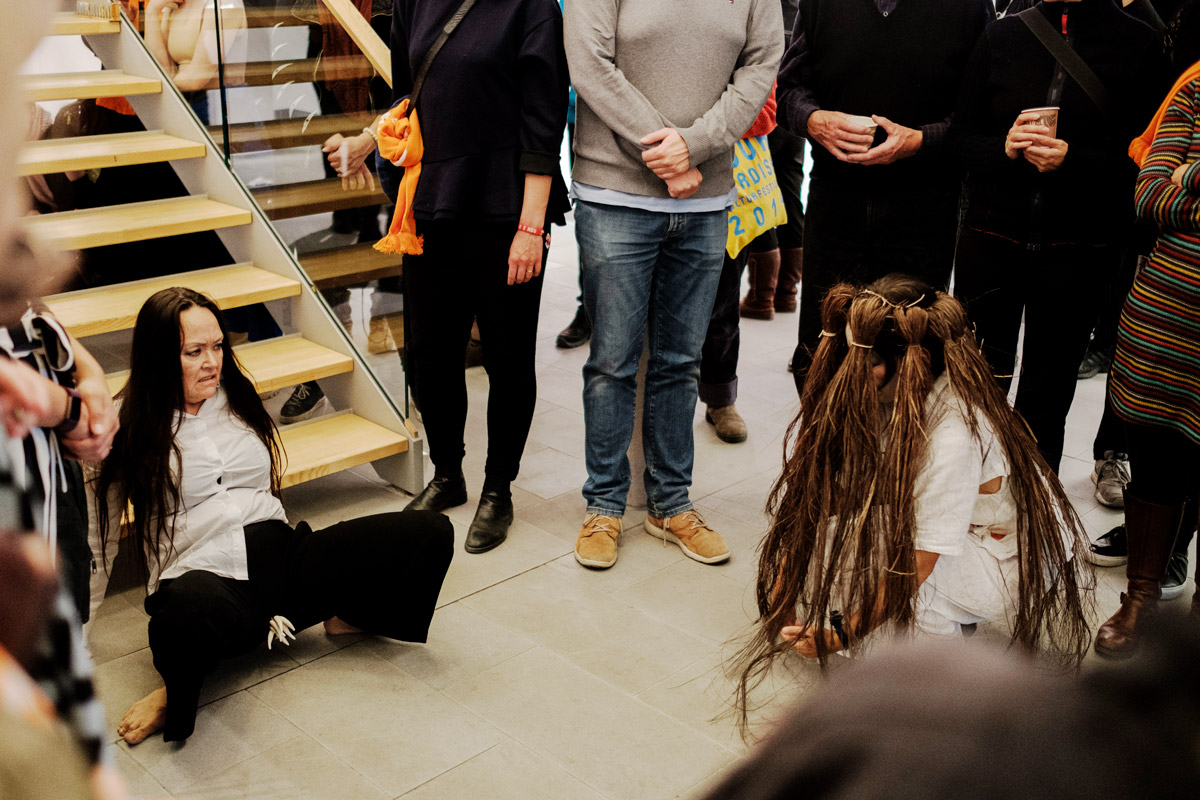 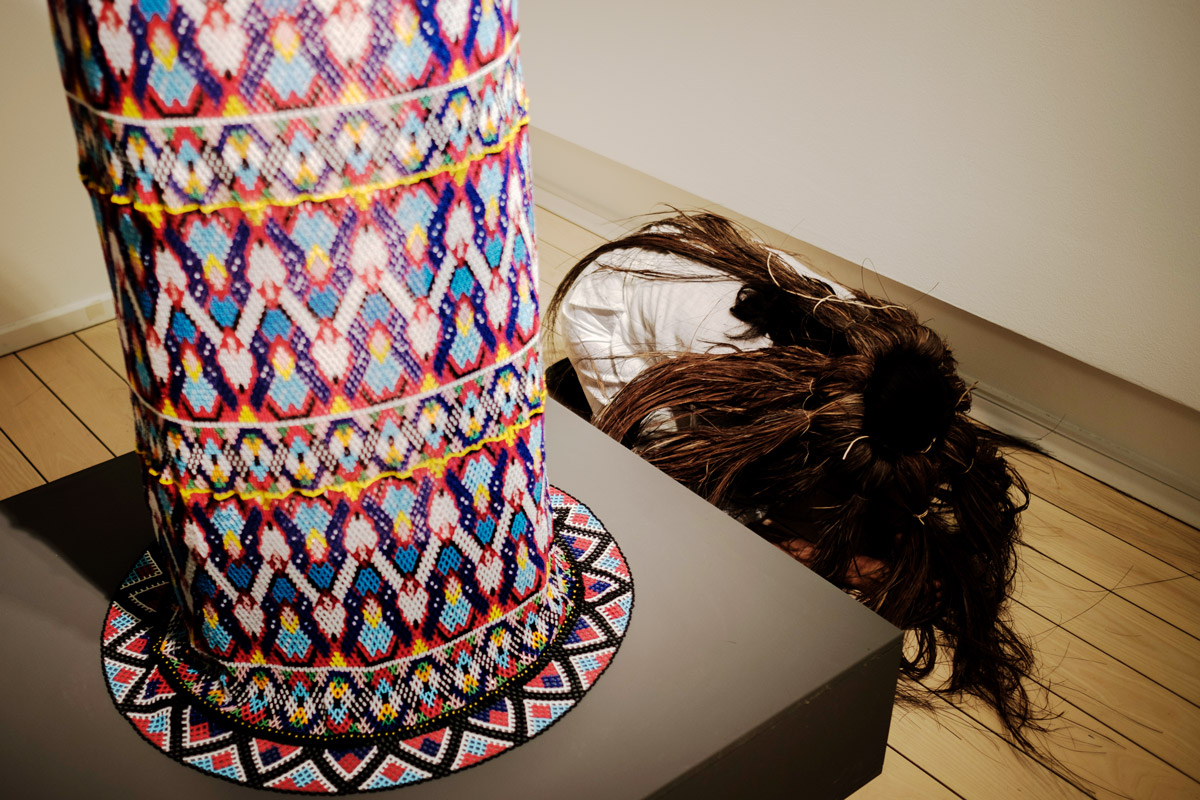 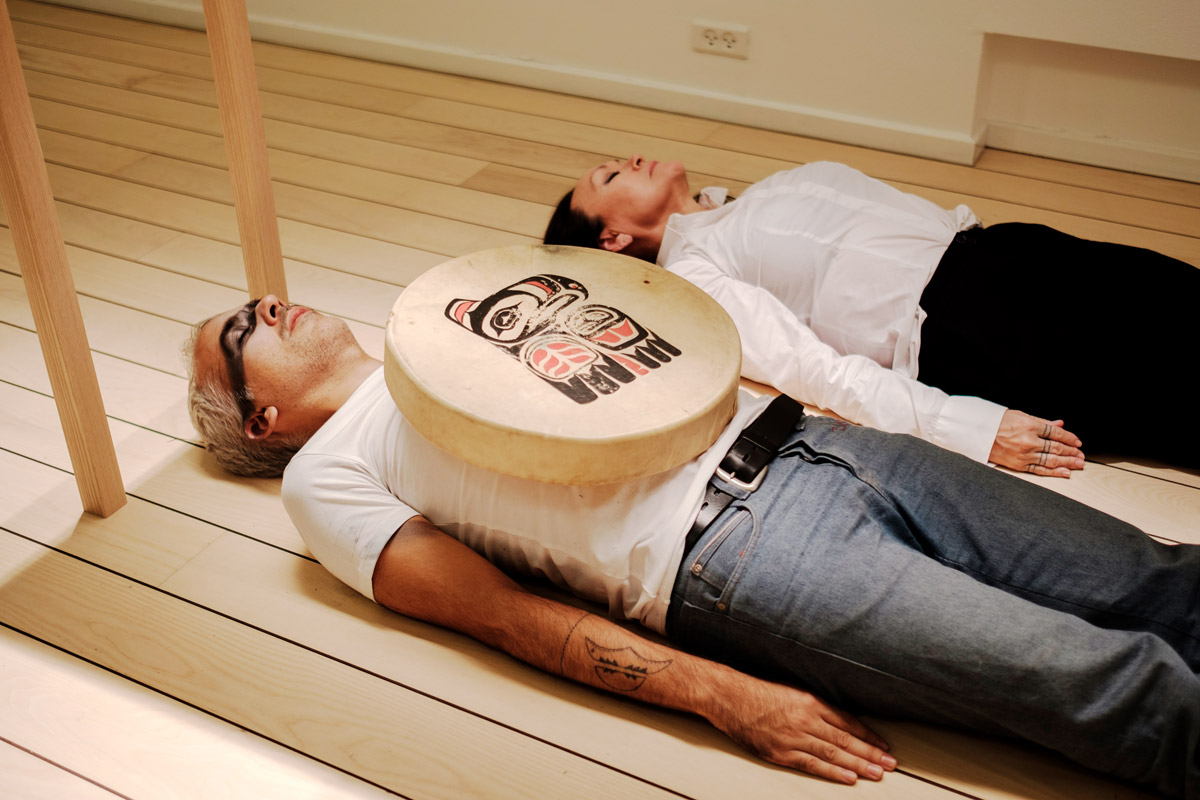 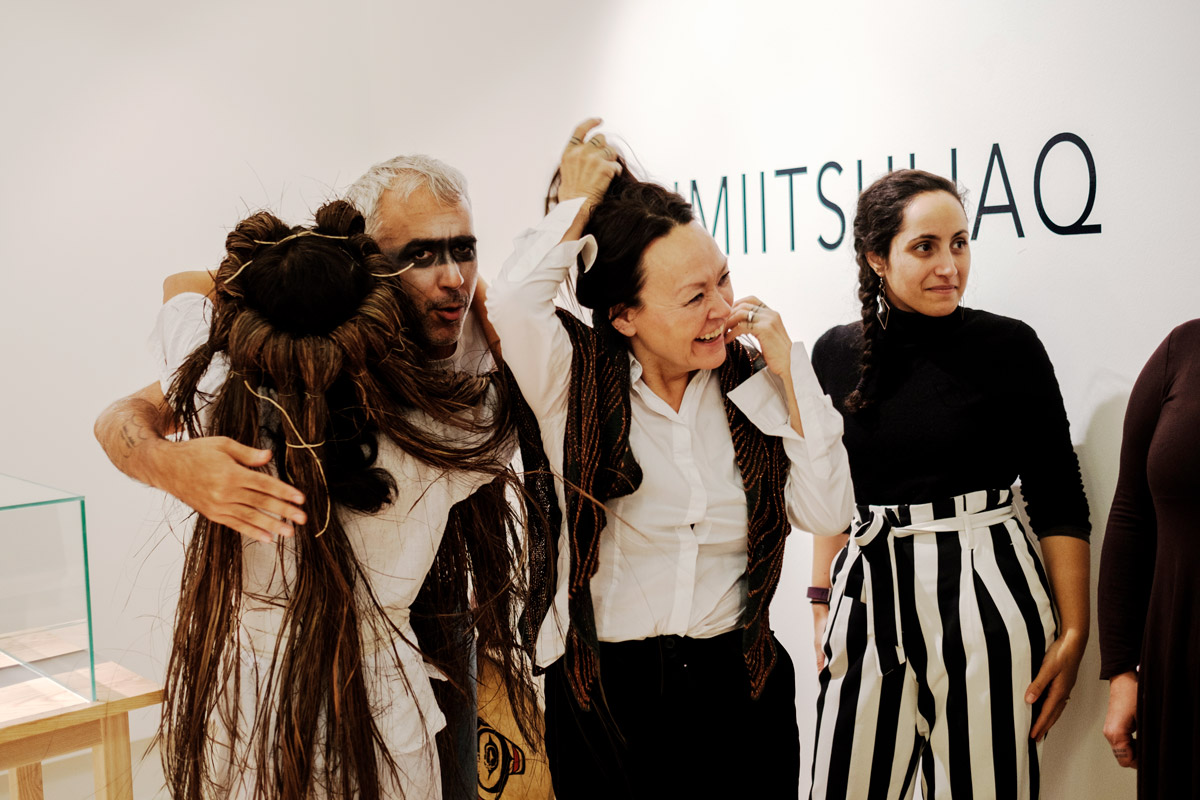 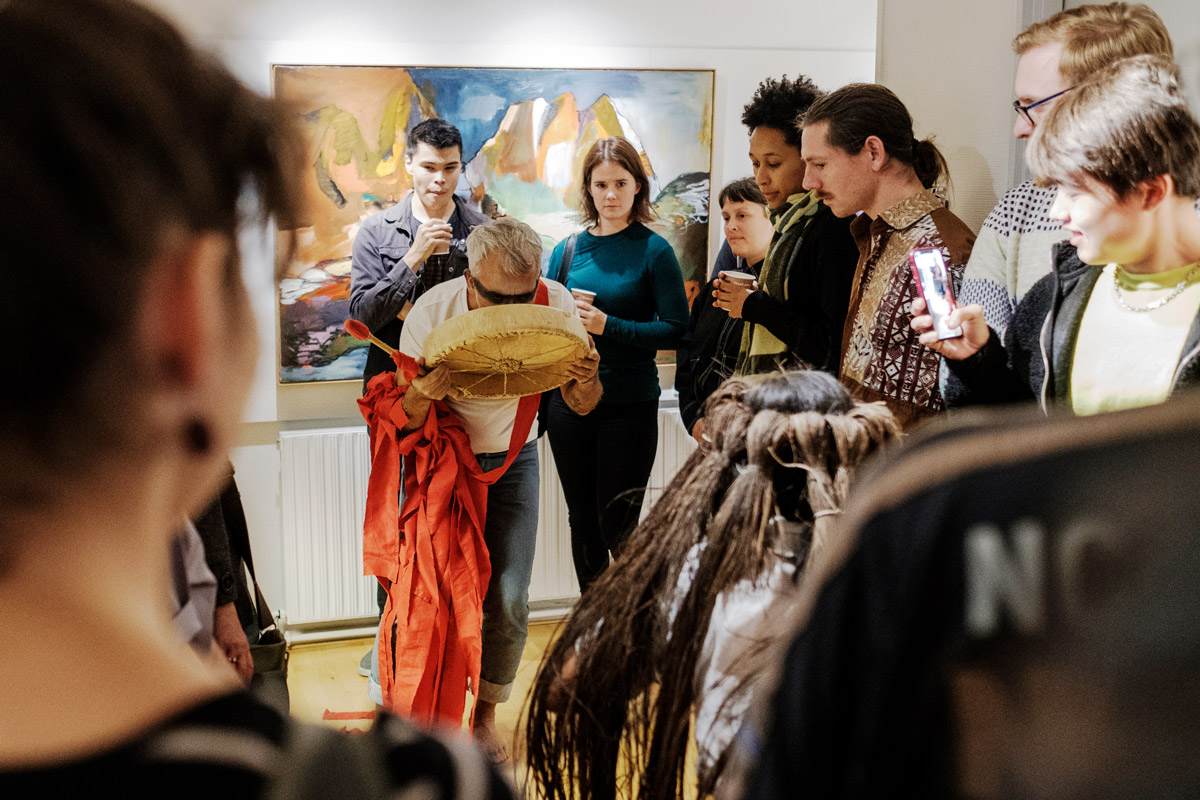 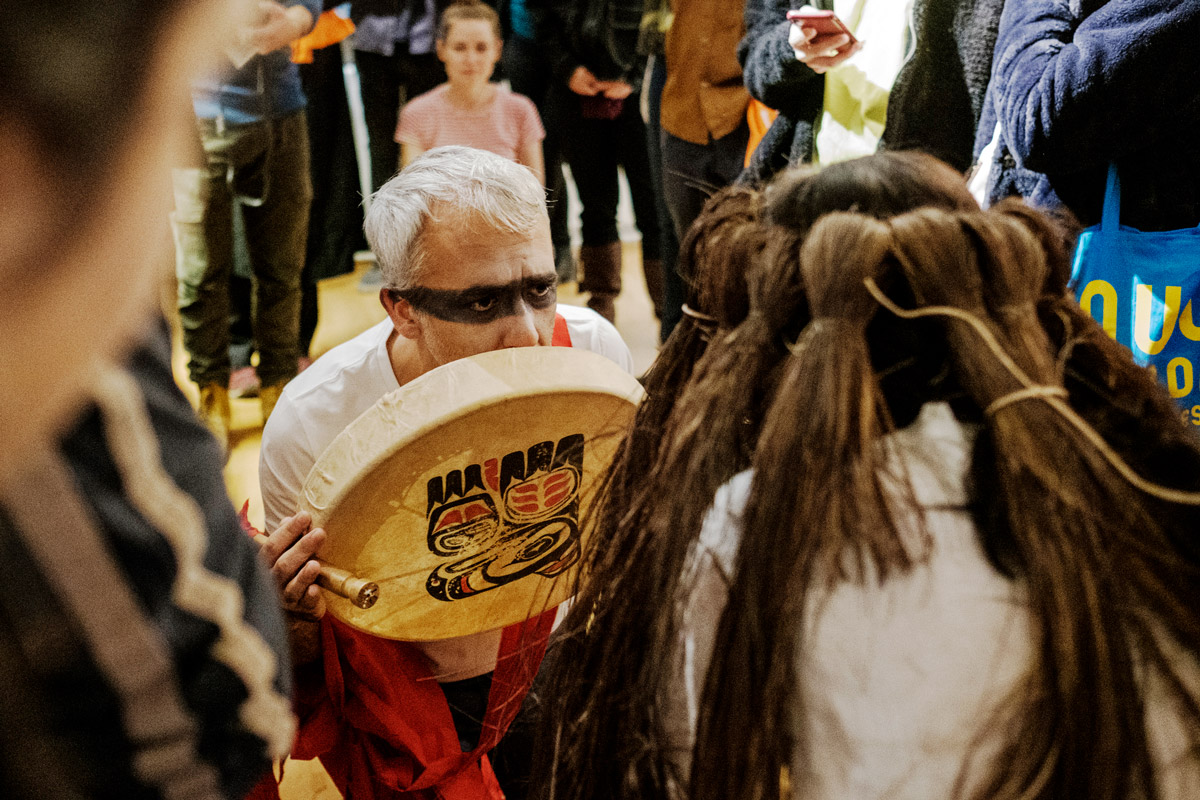 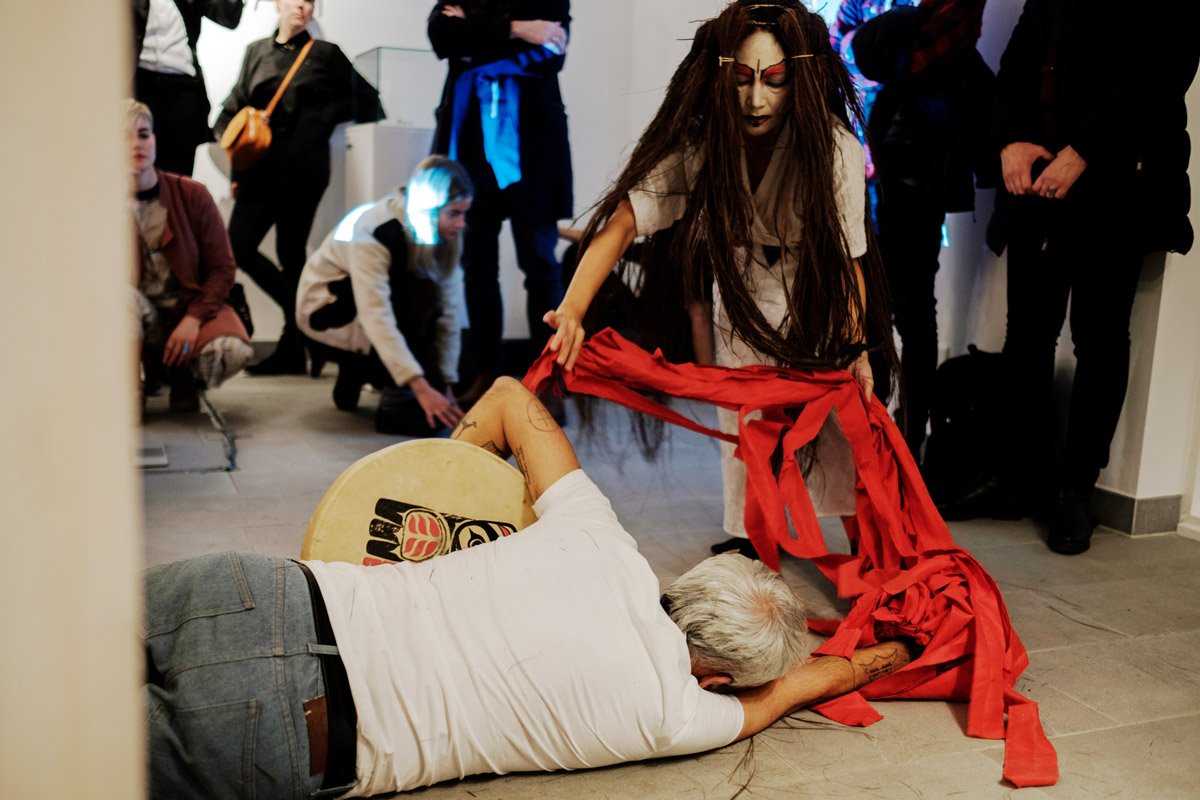 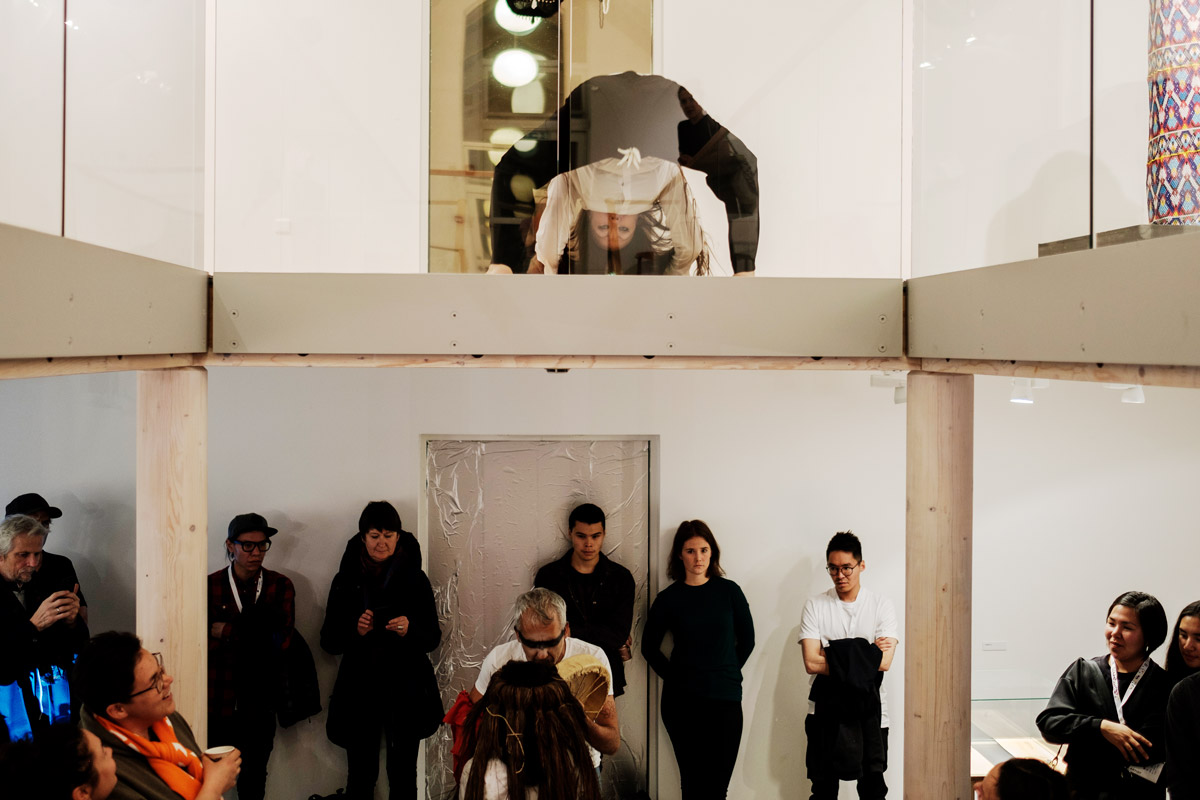 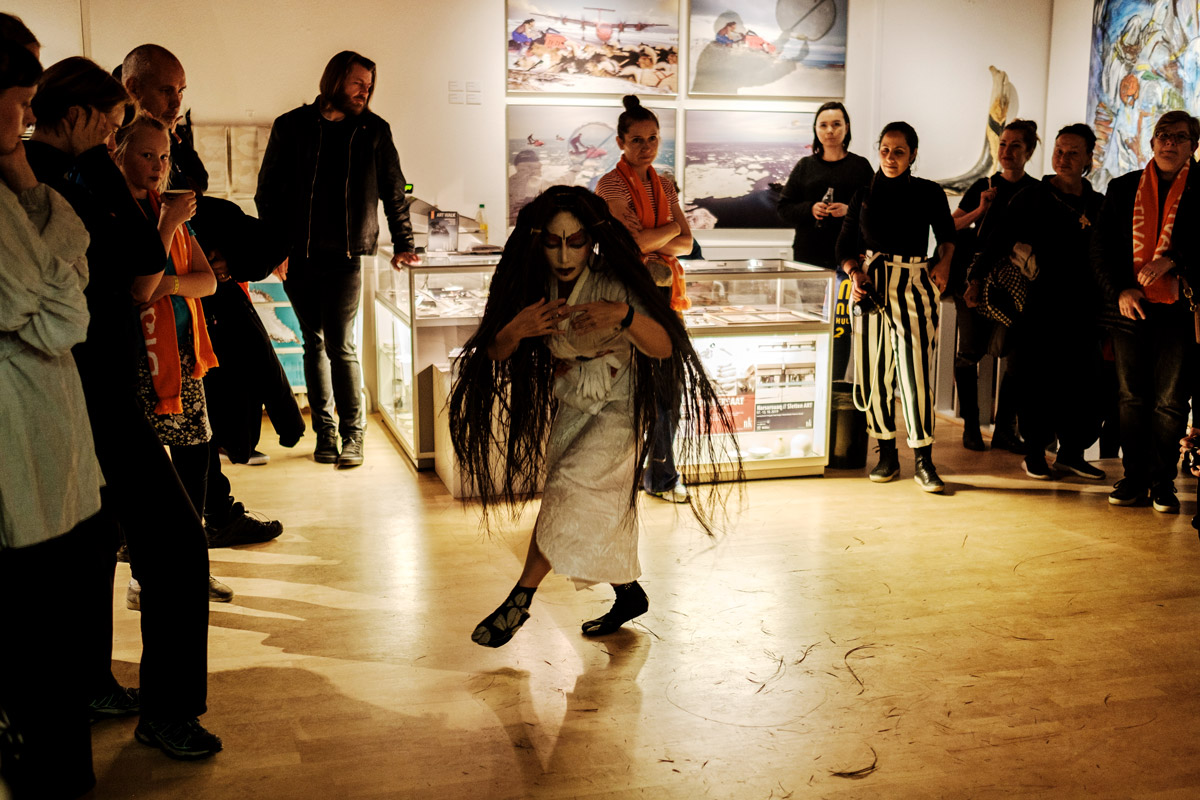 Ayumi Goto is a performance apprentice, currently based in Toronto, traditional territories of the Haudenosaunee Confederacy, Huron Wendat, Anishinaabe, and Missisaugas of the Credit First Nations. Born in Canada, she often draws upon her Japanese heritage and language to creatively challenge sedimented notions of nation-building, cultural belonging, and activism. Inspired by collaborative work, she also explores inbetweeness, land-human relations, and space-time beingness. She has served as the art facilitator at the Downtown Eastside Women’s Centre in Vancouver, Traditional Coast Salish Territories. Ayumi also guest co-edited the Summer 2012 issue of West Coast Line, "Reconcile this!" with Jonathan Dewar, which explores the interconnections between reconciliation, art, and activism, through Indigenous and non-Indigenous perspectives and collaborations. She has exhibited works at the Doris McCarthy Gallery, Gallery 101, the Alternator Artist Run Ctr., Shingwauk Residential School Centre, Algoma University, the Art Gallery of Southern Manitoba, the Art Gallery of Greater Victoria, and the Vancouver Art Gallery. Ayumi has performed in London, England, Berlin, Germany, Naha, Okinawa, Kyoto, Japan, and across this land currently called Canada. Ayumi has a Ph.D. in Communication Studies at Simon Fraser University, where she investigated and presented a practice-based sense of collective responsibility and creative critiques of reconciliation from developing a performance art practice in response to the art works and lives of Cree Métis multi-media artist, Cheryl L’Hirondelle, Siksika interdisciplinary artist, Adrian Stimson, and Tahltan performance artist, object maker and best friend, Peter Morin. Ayumi is currently a Post-Doctoral Fellow at the Ontario College of Art and Design University in Toronto.
CAMILLA VATNE BARRATT-DUE (NO | b. 1987)

Camilla Vatne Barratt-Due is a sound artist based in Berlin and Oslo. She has a background in classical accordion, electronic music and composition. The music is often based upon technical / mechanical structures where she explores ways of playing instruments as well as developing software practices such as live coding. In her performances she does various slow-cover versions of love ballads and melodic pop music that she transcribes to the classical accordion, merging aesthetics as way to search for other stories hidden inside the hits. Next to her performances, Barratt-Due builds her own instruments and engages in various methods to develop an auditive base for a listening praxis, dwelling upon what instruments and tools, are as aesthetic pieces in and of themselves. She especially explores the role of extracted sounds from old defect accordions in a new structure played with altered mechanical systems. These pieces have been shown at festivals such as Kontake (Akademi Der Kunste, Berlin), Piksel (Bergen, Norway), Media Lab (Madrid, Spain) and Algo Mech (Sheffield, UK). Barratt-Due has also composed and performed music for several stage art related productions and performances with artists such as Eirik Fauske, Ingrid Fiksdal, Rosalind Goldberg, Espen Hoiner, Esther Wrobel, Meg Stuart and Maria F. Scaroni. She is also a co-founder of the Berlin based queer collective Lecken - a rave, exploring a femme positive space devoted to the techno futurism.
ELINA WAAGE MIKALSEN (NO | b. 1992)

Elina Waage Mikalsen is a multidisciplinary artist and musician from Tromsø, Norway, currently based in Oslo, Norway, working within the fields of sound, video, performance, installation and text-based mediums. Mikalsen completed her BA in Fine Art at Tromsø Art Academy / Nordland kunst- og filmfagskole in 2017, and is currently undertaking her MA at the Oslo National Academy of the Arts. In 2015, Mikalsen was appointed ‘Young Artists of the Year’ during the international indigenous festival Riddu Riđđu, and has since been featured in a variety of group exhibitions and performance programs.

Elina Waage Mikalsen’s artistic work often draws inspiration from her dual background as Sámi and Norwegian. The meeting between the Norwegian and Sámi heritages within her own family has become a metaphor for the power relation haunting the two facets of the Norwegian society as a whole: This intimate, familiar view on a societal issue is now the platform where Mikalsen explores themes connected to identity and structural alienating, and her family has become a central, reoccurring trope in her artistic work.

Mikalsen’s other core source of material is the body, in its physical, remembering, sounding and acting capacity. She explores the woman’s body in particular, most notably in her sound work, where the possibilities and limitations of the female voice is explored in a physical, historical and gendered context. Based on this investigation, she explores the frictions and connections between the female body and the female voice, which are so often separated.
JESSIE KLEEMANN (GL/DK | b. 1957)

Jessie Kleemann is a performance artist and poet from Upernavik, Greenland. She is trained as a printmaker in Nuuk at the former Grafisk Værksted (now known as the Art School) and as well as an actress at the Tuukaq Theatre in Denmark. Kleemann’s artistic practice has spanned video works, installations and performances as well as traditional theatre productions in Greenland. She has also participated as a poet in a number of international poetry- and literature festivals, and has worked with the international performance group The Wolf in the Winter. From 1984-91 she was the head of the Art School in Nuuk, and in 2012 an artist monography was published on her practice, titled Jessie Kleemann - Qivittoq.

In her performance practice she explores the different discourses of ethnocentricities marked on the Greenlandic woman self, as in the bodily expressions as well as the gaze which one would call is stigmatizing the female other. Experimenting with blubber from seal and other animals, meat, fish, thread and bead making as costumes contradicting the posh (fancy) European dressing or undressing as a fierce cultural statement, Kleemann deconstructs the art of the Greenlandic Danish, Danish Greenlandic. It is an exploration of the postcolonial esthetics, stripping off the essence of what used to be defined by the colonized mind. The work as complied in imagery is not pretty, as someone originally trained in the art of the ugly.
PETER MORINN (CA | b. 1977)

Peter Morin is a Tahltan Nation artist and curator. Throughout his artistic practice, Morin investigates the impact zones that occur when Indigenous practices collide with Western-settler colonialism. Morin’s artworks are shaped, and reshaped, by Tahltan epistemological production and often take on the form of performance interventions. Morin’s practice has spanned twenty years so far, with exhibitions in London, Berlin, Singapore, and New Zealand, as well as across Canada and the United States.

In addition to his exhibition history, Morin has curated exhibitions for the Museum of Anthropology, Western Front, Bill Reid Gallery, and Burnaby Art Gallery. He was longlisted for the Brink and Sobey Awards, in 2013 and 2014, respectively. In 2016, Morin received the Hnatyshyn Foundation Award for Outstanding Achievement by a Canadian Mid-Career Artist. He holds a SSHRC grant, Crossing media, Crossing Canada: performing the land we are, which explores the meeting up of media and durational performance. Morin currently holds a tenured appointment in the Faculty of Arts at the Ontario College of Art and Design University in Toronto.
ABOUT CONTACT · 2019 EDITION 2018 EDITION 2017 EDITION
DISKO ARTS FESTIVAL
Artistic Facilitator / Aaqqissuisoq
Sofie B. Ringstad
sofie@diskoartsfestival.org